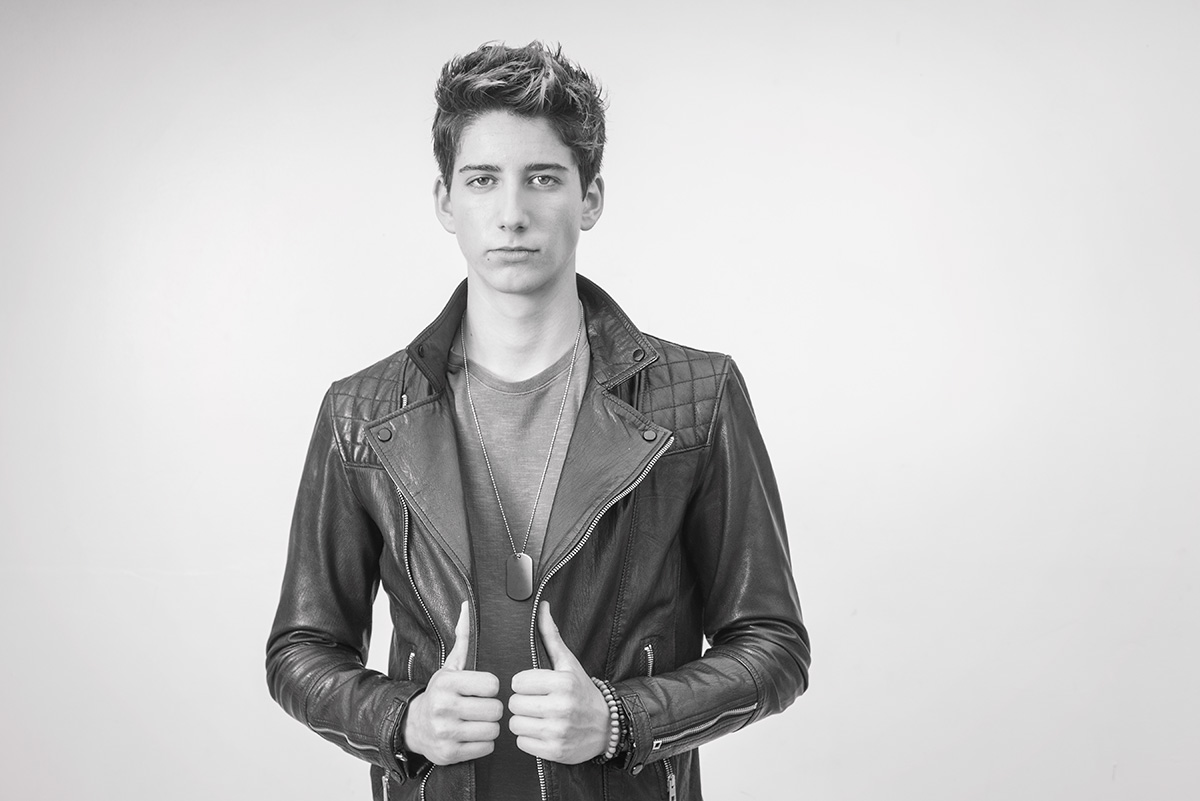 By Anna Tallarico
Actor Milo Manheim is only sixteen years old, and already he has an impressive resume. With multiple plays under his belt, he is making his film debut starring alongside Meg Donnelly in the Disney channel original movie “Zombies,” set to be released in 2018. Keep an eye out for it! And keep an eye out for Milo, too. No doubt you’ll be seeing him more and more on the big screen.

R: Tell us a little about yourself.

M: I was born in Los Angeles, and I have lived in the same house for sixteen years. I grew up near the beach, and I love surfing, playing soccer, volleyball, and skiing. I play five instruments- some better than others. My favorite thing in life is to hang out with my friends. When we’re together we love to cook, write music, and make movies.

R: When did you first get into acting?

M: My best friend growing up was named Jyan. I saw him in a community theater production and I decided right then I wanted to act with him. We did fifteen plays together at that theater. We loved doing it so much, in our spare time we used to put on musicals in the garage. We’d even make fliers and sell tickets. The home videos I have are pretty hysterical.

R: Tell me more about your work in theater. What’s different about acting in plays versus acting in movies?

M: Acting in a play requires a different kind of energy and is a lot more nerve racking, because you only get one chance to do it. You have to be a lot more expressive on stage because you have to be able to reach a large audience, even the people in the back row. On the screen, you can be a bit simpler and smaller, but both require the same level of honesty, focus and commitment. Becoming a new character is the same no matter what medium you’re acting in; you just have to adjust your physical level of energy.

R: Tell me about your new movie Zombies. What’s it about? What was the audition process like? What was the filming like? Any fun stories?

M: Shooting Zombies was by far the best experience of my life. It’s like a dream come true. I got to do everything I love-singing, dancing, acting, rapping, tapping, and flips. I didn’t have an agent at the time and I wasn’t perusing auditions. A few years ago, a casting director had seen me perform in the musical Rent and she remembered me. She hunted me down and asked me to audition for Zombies. I had to audition about ten times, but it was all worth it. At first, I just made an audition tape, but the casting director saw something in me and pushed to have me seen by the director. After that, I had to go a bunch of times to read for different producers and the head of the Disney Channel. I then read with a few really talented girls to play Addison, but when Meg and I met at the callbacks, we totally clicked. After we got cast in the movie, we met a couple of times for lunch before we started shooting. Once we got to Toronto, we were inseparable. Not only did I love making the movie, but I met some amazing people who I know I will keep as friends forever. We went through something very special together. Right after we finished Zombies, I did a play called Generation Me in New York City. Meg and a lot of the cast came to New York to see me in it. We are all really supportive of each other.

R: What are some of your future goals and plans?

R: If you could work with any five actors, actresses, or directors, who would you choose and why?

M: Jim Carrey is my number one. It’s been a dream of mine to be in a movie with him ever since I was a little kid. I wrote a letter to him when I was twelve telling him what he meant to me. I probably read his autobiography ten times. You can quiz me! He is the only one in the world with his amazing physicality and it makes me feel like I won’t have to lose all the craziness I have now. People just see him as a whacky comedian, but I know he is so much more than that.

Tye Burrell – He is brilliant and makes me laugh every single time I see him.

Melissa McCarthy – Needs no explanation. She is incredible.

Ryan Gosling – His subtlety is very unique, and I really admire his acting. When I’m watching him, I forget I’m watching a movie and I just fall into that world. I also love that he sings and dances.

Meryl Streep – I learn things from her just by watching her performances. I can’t imagine what I’d learn if I was actually working with her. She really is the queen of all actors.

R: What are some charities that you’d like to raise awareness for?

M: There are so many charities that deserve support. The ones that I have focused on in my life are:

Waterkeepers Alliance – I have been supporting the Waterkeepers since I was a kid. They are dedicated to protecting everyone’s right to clean water.

Suicide Prevention Lifeline — No matter what problems you’re dealing with, whether you’re thinking about suicide or you need someone to lean on for emotional support, call the Lifeline. 1-800-273-8255. People call to talk about lots of things: substance abuse, economic worries, relationships, sexual identity, getting over abuse, depression, mental and physical illness, and loneliness, to name a few. There is someone out there who will listen and can help you.

Pediatric AIDS – I have been attending the Elizabeth Glaser Pediatric Aids fundraisers for most of my life. I hope that in my adulthood we will find a cure for AIDS, but until then we need to find a way to prevent AIDS in children.

R: What advice do you have for other young people that want to pursue a career in acting?

M: If acting is something you are really serious about, you can’t be afraid to mess up and take chances. You’ve got to be able to fail, and when you do fail, great things come out of it. If you love it, go for it. I know it seems impossible, but if you truly want it and are willing to work for it, it can happen. Take classes, make movies with friends, audition for plays. Experience is your best teacher.

R: Is there anything else you would like to add?

M: Thank you for letting me be a part of this interview. It’s exciting to tell my story. I just want to thank everyone who made it possible to be in the place I am now- all of my teachers, directors, family and friends who supported me while I failed and succeeded and got to where I am now.