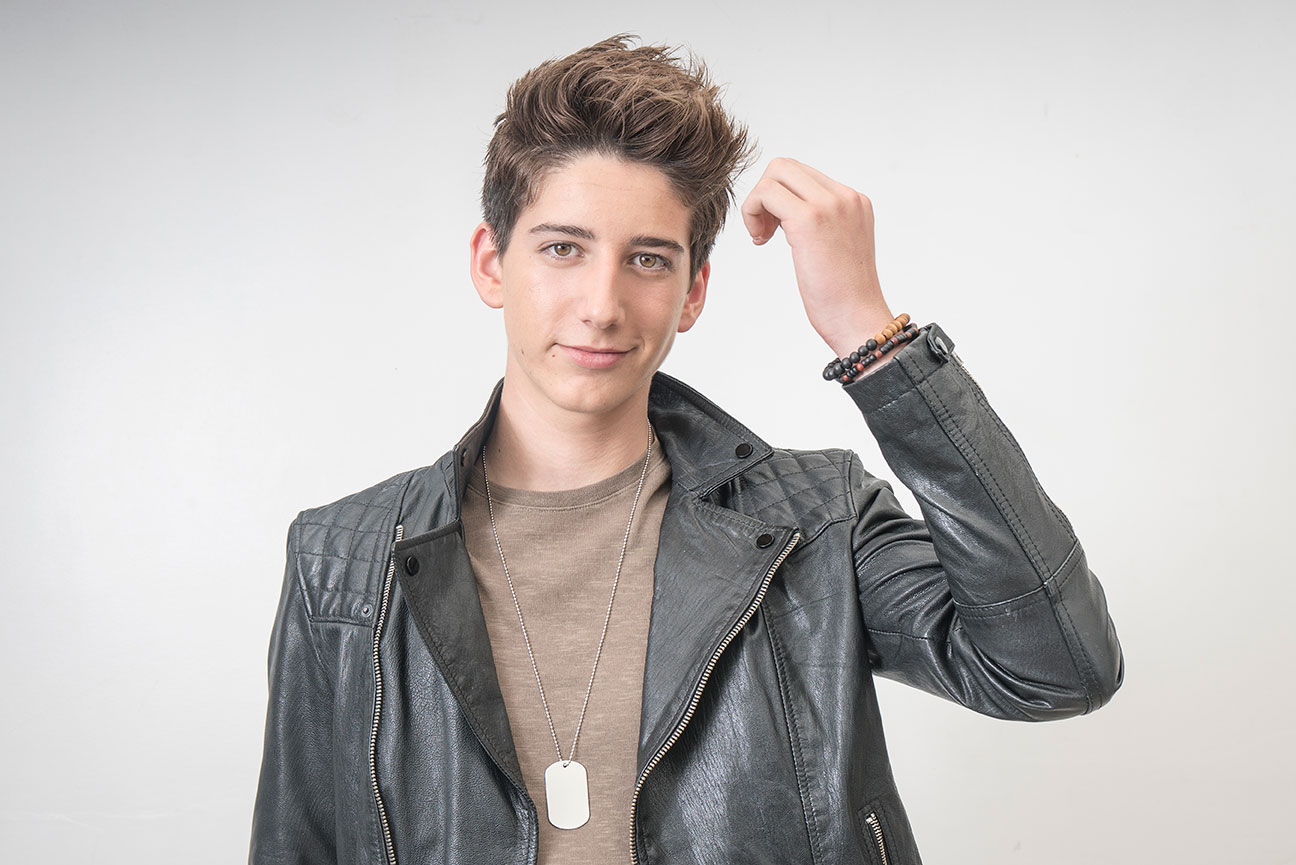 There are no sure things in show business, but it’s safe to say when you land a lead role in a Disney Channel musical, you’re on the fast track to success. The network is responsible for launching the careers of Zac Efron, Vanessa Hudgens, Raven Symone, and The Jonas Brothers, and one actor who we’re predicting will be the next big thing, Milo Manheim. This fresh face will star as Zed in the Disney Channel original, Zombies, which airs in early 2018.

P-C: Tell us about Zombies and your character.
Milo: Zombies takes place in a town called Seabrook. It’s a divided community with one side being the zombies, and the other, the humans.

When the film opens, it’s my character’s first day of school. I play Zed, who is a zombie that wants to try out for the football team. When I arrive, I’m treated like an outsider, even by my teachers, and they won’t let me try out for the team. I spend the majority of the film trying to win over everyone’s heart to help bridge this gap between the two sides. For Zed, he feels like joining the football team can help do that.

The film teaches an important lesson about acceptance and not judging others. We need to embrace people’s uniqueness and be more kind to each other. Zed is a very stylish character and also incredibly positive. He wakes up every day with a smile on his face, excited to see what life has to bring him.

P-C: What drew you to this project?
Milo: I started acting at a very young age, but I wasn’t landing any roles. I thought to myself that maybe television and film weren’t for me and that I should stick to theatre. I’ve done theatre my whole life and I was doing a show at my school. Luckily, an old casting director saw the show and told me I should audition for this role. It was a lengthy process before I learned I landed the part. It was insane because I never thought this would happen. The project sort of found me.

P-C: Did you feel any pressure with this being your first major role and you’re playing the lead?
Milo: I was really nervous about it. My mom helped me a lot. As you know, she’s an actress and has tons of experience. She would tell me, “Milo, you were born to do this. They chose you for a reason.” It really helped calm me when I was scared. I thought I wasn’t ready, but I really was.

P-C: Disney has had a lot of success with musicals. What is unique about Zombies?
Milo: I love all the Disney Channel musicals that they’ve done. I think what makes this one stand out is the dancing. It’s so unique because it’s like robotic, funky, and zombie-like. Also, the message of the film is really important and timely. I can’t wait for everyone to see this.

P-C: Would you say you’re a natural dancer? How did you pick up the choreography?
Milo: That’s a funny story! During my audition process, I didn’t do much dancing. I sang a bunch, but that was it. So, when I headed to Toronto—where we shot the film—I didn’t expect much dancing, but when I arrived, I realized that wasn’t the case.

I wasn’t too worried about the dancing because I was like, “I got this.” It was such a challenge juggling the three—singing, acting, and dancing.

P-C: Do you have a favorite song on the soundtrack?
Milo: That’s a hard question! I don’t know if I can pick just one. Each song is so different. There’s an emotional one that’ll get you going and some upbeat songs that’ll get you hyped. If I really had to choose, I would say I’m excited for everyone to hear a song called “Some Day”. It’s an emotional song about acceptance and realizing how powerful words are.

P-C: How similar would you say your high school experience is to your character’s?
Milo: I think everyone, at some point in their life, feels like they’re being judged. We need to build a world where we can all support each other, and I feel lucky that I have that in my life.

P-C: Guilty pleasure movie?
Milo: I would have to say Ace Ventura. I could watch that movie for the rest of my life and never get bored. I’m a huge Jim Carrey fan.

P-C: Favorite book?
Milo: Probably Hunger Games. I love reading, but I’m not a huge reader. It’s so hard to find a good book. I do love seeing movies adapted from books and then reading them afterwards.

P-C: Favorite play or musical?
Milo: I’ll give you my Top 5! In no particular order…

P-C: A band or artist that fans would be surprised to learn is on your playlist?
Milo: The Beatles! I could listen to them all day…and Billy Joel. I love Billy Joel. “Vienna” is probably one of my favorite songs.

P-C: Hidden talent?
Milo: I can play like seven instruments.