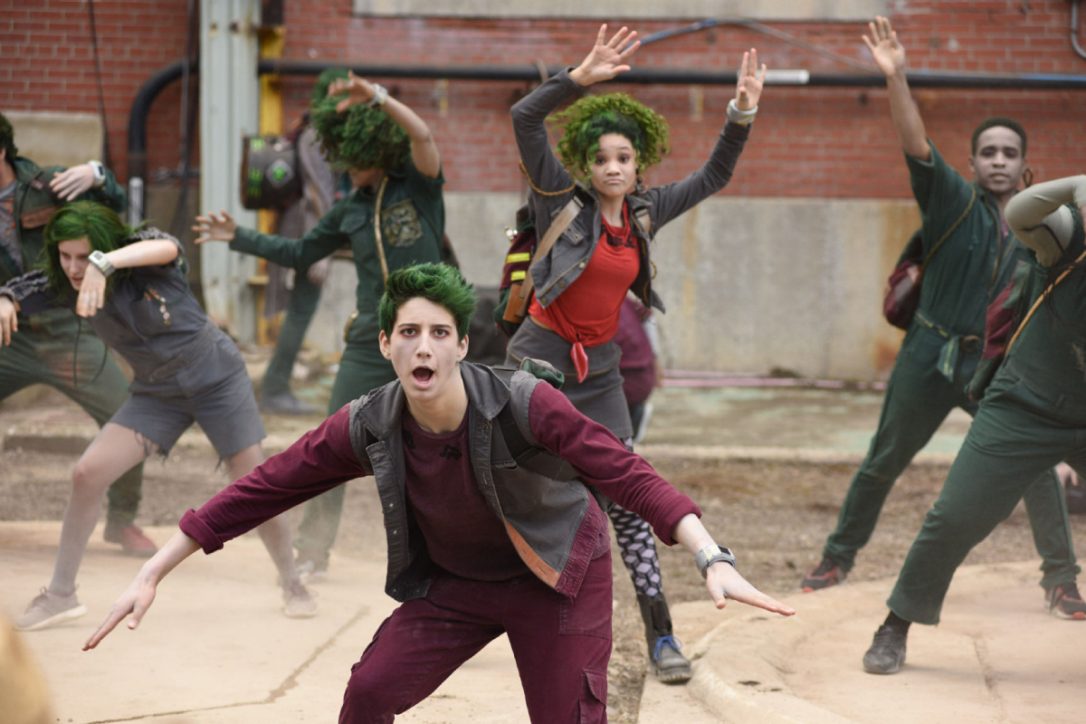 Part of the process of casting often includes what is known as a chemistry test. Actors are mixed and matched to read together in hopes of a connection that will make them the perfect pair for the project. In the case of the new Disney Channel original movie Zombies, neither Meg Donnelly nor Milo Manheim needed a casting director to tell them they had chemistry.

“As soon as I saw Milo, we instantly became best friends. We were paired up with different people but we were talking the entire time,” Donnelly says. “It was so easy to do scenes with Milo because the friendship our characters have in the movie is what was happening in real life.

The only argument Manheim offers is he’s convinced Donnelly is the best.

Manheim says, “I had no idea what I was in for when I first met her. After the first time I met her, I had made it a goal to continue being friends with her whether or not one of us got a role, neither of us got a role or both got a role.

“She was the happiest person I had ever met in real life. She was like a character out of a movie because she’s constantly smiling. And now, she’s one of my best friends.”

What they felt is what the production team saw and the pair star in the made-for-cable film that is Descendants meets Twilight. The music- and dance-filled story looks at a semester at Seabrook High School, where students from nearby Zombietown are integrated into the school. Humans and zombies must find a way to get along.

Addison (Donnelly) is a freshman who dreams of being a cheerleader. But that changes when she meets Zed (Manheim), a charismatic zombie determined to play football for the Mighty Shrimp, a team that desperately needs a win. The flak Addison takes for befriending a zombie changes when the team starts winning games.

Donnelly, the 17-year-old best known for her role in ABC’s comedy American Housewife, had only a few days off before starting work on the Disney movie. The process started with four weeks of rehearsals that included a lot of dancing and singing. The fact Donnelly grew up performing musical theatre in Peapack, N.J., and was the lead singer of a pop/rock band made all of the performance rehearsals a fun part of the job.

“The fact that this was not only singing and dancing and acting but was also on camera made it really cool,” Donnelly says. “I started doing television roles, but musical theatre has always been a big passion of mine.”

Part of the chemistry the actors initially felt could be because they have similar tastes in entertainment. Both Donnelly and Manheim share a love for the same production: Disney’s High School Musical. When Donnelly was 5, she watched nothing else but High School Musical, and her dream was always to be in a Disney Channel musical. Manheim has seen the film more than any other movie and had a High School Musical-themed birthday party when he was 7.

The Zombies stars became good friends while making the musical. That helped after long days of work, as they would help lift each other up for the next day. They would be exhausted, but Donnelly calls it “a good tired.”

“It was a lot of work and I can especially remember being terrified of the dance rehearsals,” Donnelly adds. “There was all these professional dancers, but the choreographer, Christopher Scott (Teen Beach Movie), is such an amazing guy who after the first day made me feel comfortable.

“I was really scared at the first because I didn’t know what to expect, but once you get started, you really get into the grind of it.”

Manheim also felt some nerves when he had to dance for the first time. What helped him work through the concerns was the direction given to him by Scott, as well as the gymnastics he had done in the past as part of a circus troupe, where he was on the trapeze and juggled. One of the dance numbers features a floor made of a trampoline material that no one was sure how to use except for Manheim. He jumped into that number with a very physical enthusiasm.

“That’s a perfect example of feeling like an outsider when it came to dancing,” Manheim says. “I was definitely the worst dancer in the room because everyone else there was so trained. But when they brought in the trampoline, I said, ‘OK. Let me show you how it’s done.’ ”

Manheim, the 16-year-old son of actress Camryn Manheim, grew up on television sets and worked in local theatre starting at the age of 7, appearing in Rent, Footloose, Tommy, A Chorus Line, Gypsy and Spring Awakening. He was discovered when casting director Amber Horn saw his performance in Rent. After he wrapped production on Zombies, he was named Best Leading Actor for his role in the musical Generation Me at the 2017 New York Musical Festival.

The only concern Manheim had when he heard about the production was being able to sing and dance, considering how stiff-legged a zombie moves, and that their vocabulary is limited to a few groans and “arghs.” It was after the first audition that Manheim learned these zombies have a more flexible dancing and vocal range. He ended up playing the character a lot like himself, without all that brain-eating baggage.

As soon as filming wrapped, Donnelly headed back to work on American Housewife, where she plays a teenager headed into high school. Comparing that work with her Zombies character, Donnelly says, “They are both trying to find themselves, but I would say Addison is … way more optimistic and brave. Taylor is a little more self-conscious.

“But, Addison and Taylor have the same desire to want to fit in in high school.”

And if Donnelly had to select between the high school her character attends in American Housewife and the one her character goes to in Zombies, the choice would be simple: She would pick the one with the walking dead because “zombies are cool.”

Also starring in Zombies: Trevor Tordjman, Kylee Russell, Carla Jeffery, James Godfrey and Kingston Foster. If you miss the original broadcast, the soundtrack from Walt Disney Records will be released Friday with 10 original songs performed by the cast. Zombies will be available on VOD and DisneyNOW starting Saturday.