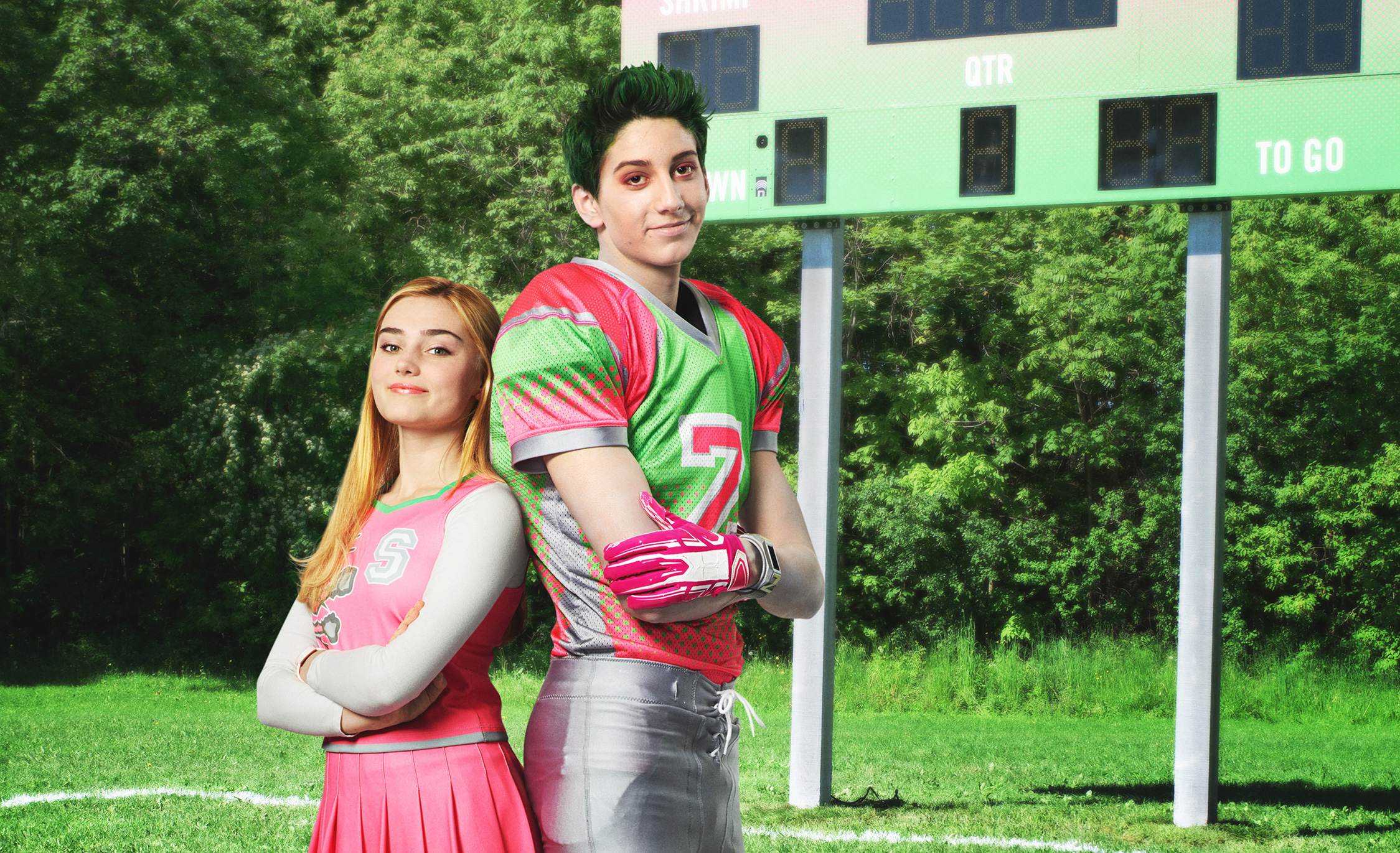 When the latest Disney Channel original movie arrives Friday, Feb. 16, it will have many of the elements that viewers know and expect from the network: Teens from different high school cliques, song-and-dance numbers, its characters learning a positive message along the way.

Oh, and in this one? Zombies.

That’s right, it might be a sign of the zombie apocalypse, it might the moment we reach Peak Zombie, but Disney Channel titled this new movie “Zombies.” It delivers what that promises, but does make the zombies palatable for a Disney Channel audience.

“When I first read the script I was like, ‘Whoa, zombies?’” says Meg Donnelly, who plays Addison, a cheerleader at Seabrook High School where only the human kids go until the zombie teens are transferred in from Zombietown.

“I looked into it more and thought, ‘Wow, this is really cool: zombies with humans, but zombies aren’t liked by humans,’” says the 17-year-old who also appears on the ABC sitcom “American Housewife.”

The set-up for “Zombies” will be familiar to anyone who’s seen a Disney Channel movie before: There’s fear and estrangement between the human kids, who are eerily uniform in lifestyle and personality, and the zombie kids, who are the individualists. (You mostly know they’re zombies by their pale skin, green hair, and fresh dance moves.)

Addison and zombie Zed form an attraction for each other and through that spark end up bringing their tribes together. (Zombies in “Zombies” don’t kill you; there’s a cure that puts them on a brains-free diet.)

“I think zombies, they’re representing everyone who’s different and unique in their own way,” says Milo Manheim, 16, who plays Zed. “Zombies don’t feel like they’re being accepted in this town.

“I grew up in doing theater and that wasn’t the norm for boys,” says Manheim, for whom “Zombies” is his first professional role. “Everybody else was doing sports. Being different is not something we should look down on.”

Donnelly, who’s been acting for much of her life, says playing Addison is a dream come true.

“When I was 5 I wanted to be in ‘High School Musical,’” says says of the popular franchise from which “Zombies” is a clear descendant. “In any Disney movie, really.”

Like Manheim, she sees the value of the message the movie carries.

“Seabrook is very conformed so everything looks the same, everything looks perfect,” Donnelly says. “The fact the zombies are unique and different, I guess that’s what it’s representing: being yourself.”

Both Donnelly and Manheim are featured prominently in the song-and-dance numbers that pop up throughout the movie, and both said those were some of the most fun moments on the set of the film made in Toronto over 10 weeks of rehearsal and shooting as well as some of the hardest work.

“Learning the dances was not the hard part, it’s just that the dances were really difficult,” Manheim says.

“For ‘BAMM,’ it was really difficult because the zombies are supposed to look super cool,” Donnelly says of that musical number.

“It ended up looking super cool, having this mixture of both sides of dance,” says Manheim, who is the son of actress Camryn Manheim, an Emmy winner for her work on “The Practice.”

“She couldn’t have been happier,” he says of her reaction when he landed this first role, earned him some family bragging rights. “I think I will be the first person in our family to play a zombie.”

Both hope viewers of all ages, not just the tween and teen audience, will give “Zombies” a try, for all of the reasons they’ve mentioned already, but mostly for its message that you should be you and not worry what others think.

“Whatever you have that’s unique should be celebrated and not hidden,” Donnelly says.