Milo Manheim is one of the talented young star of Disney’s ‘Zombies.’ He talks all about his breakout role in our EXCLUSIVE interview!

Milo Manheim is a name you’re going to want to remember. The 16-year-old is making his big debut as Zed in the highly-anticipated DCOM titled Zombies, which premieres Feb. 16 at 8 p.m. Zed is a zombie who meets Meg Donnelly’s character, Addison, after zombies are allowed to attend the high school in Seabrook. Zed and Addison form an instant friendship. They show everyone in Seabrook just how much you can achieve when you accept everyone’s differences and work together.

HollywoodLife talked EXCLUSIVELY with Milo about his exciting role in the Disney Channel Original Movie. We have all the Zombies scoop you need. From what he loves most about Zed and Addison’s friendship to dying his hair green multiple times while filming, Milo dishes on all of it! Check out our Q&A now! 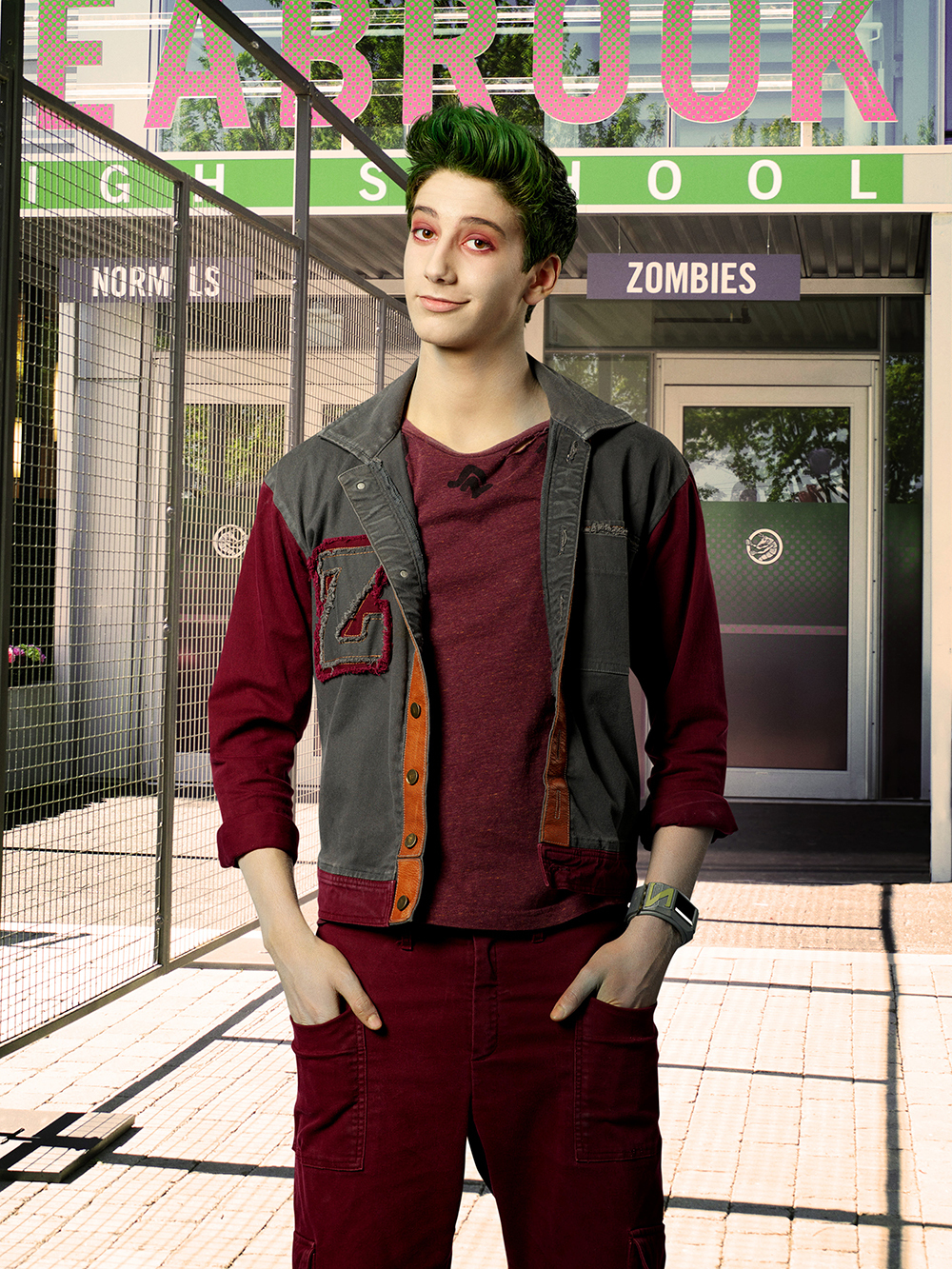 This is a huge role for you! What was the casting process like for the character of Zed?
Milo Manheim: It was definitely crazy. I remember I had acted as a child. I went on auditions and stuff just because my mom [Camryn Manheim] knew people since she was in the business, so she was able to pull some auditions for me. I never got anything. I started when I was 10 and stopped when I was about 13. When I was 15, I was in Rent at my school and a casting director named Amber Horn came to see me. She told me that I should totally audition for this movie. It’s right up my alley. This role would be perfect for me. I listened to her and auditioned and I was called back like 11 times or something. The process was super long. Around the sixth time, I met Meg and started doing chemistry reads, and we finally got the part.

Have you always been into music and musicals?
Milo Manheim: Yes, I started doing musicals when I was around 7 years old. So of course I’ve always been into musicals my whole life and watching my mom act growing up, being on set, seeing all her work behind the screen, I thought it was the coolest thing. I play 7 instruments, so I love music. I don’t think I realized how much I loved it until this whole experience. I realized I know exactly what I want to do with my life. It’s what I love more than anything.

Tell me about Zed and what he’s all about.
Milo Manheim: Zed is a very optimistic zombie. He loves to play football. That’s his dream. He’s going to do anything he can to make that dream come true. He’s very stylish and very charming. He has a lot of swagger. He’s very positive. Everyone loves being around him. He has a great sense of humor and he fights for what he believes in, which I think is the most admirable thing about him. He always fights for what he believes in. And he doesn’t take no for an answer. He will do what’s right.

What was the makeup process like?
Milo Manheim: It really all depended on what I was wearing. Doing my arms would take so long, so if I had a long sleeved shirt, it would take so much quicker than wearing short sleeves. Starting out, the longest time it would take was two hours. But that’s also because we were spray painting my legs, and I would always squirm when it was around my eyes. I wasn’t used to putting on makeup. But eventually I think our fastest time was one hour. We realized we didn’t need to spray my legs, we could just put on grey leggings, which we figured out pretty late in the process [laughs].

Did you have to spray paint your hair every day?
Milo Manheim: No, actually, I’m the only person in the movie who has real dyed hair. I think I probably dyed my hair 30 times in Toronto. Before the movie even started, I dyed my hair 10 times just to find the right color. And then every week, we had to re-dye it just so my roots weren’t showing.

I can’t believe you dyed your hair green!
Milo Manheim: I was really into it. I’ve never done anything like that before, but I mean why not? It was so much fun.

What’s your favorite part about Addison and Zed’s friendship? They’re the heart of the movie!
Milo Manheim: I think the best part about it is that they’re from two different worlds but they’re both going through the same thing. They’re both feeling like they’re unable to be accepted, so they really understand each other. I feel like Addison is Zed’s voice in a way because people aren’t giving zombies a chance. He finds her and she totally understands what he’s going through. She is able to speak up and be heard. I think that’s why they’re such a good duo because they work so well together. And also, they like each other a little bit, which I think is extremely cute.

What was it like working with Meg?
Milo Manheim: She is a ray of sunshine. She is always smiling. No matter what I’m going through, I know I can always go to her and she’s going to help me out because she’s just so happy and positive all the time. She’s one of the best people to have in your life because she brings nothing but joy, and that’s all I want from a person. We’re best friends. I love being around her. I feel like we are very similar to our characters. She and Addison are both so optimistic and strong and happy about life.

What can you tease about the songs in the movie?
Milo Manheim: I mean, you’ve got everything that you want. You’ve got your love songs, you’ve got your beginning of the school year song called “My Year.” Every song, you can dance to. And that’s the best part about the soundtrack. It’s just the most groovy vibes you could get out of a soundtrack.

Do you have a favorite Zombies song?
Milo Manheim: I don’t want to be cliche by “BAMM.” It’s just so good! I mean, can you not dance to it? I dare you to listen to “BAMM” and not dance to it.

You show off some killer dance moves in “BAMM.” Have you always been a dancer?
Milo Manheim: Before I went to Toronto to shoot the movie, I felt pretty good about my dancing. I can move. I can keep the beat. But once I got up there and saw all these professional dancer and everyone in the cast was so talented, it was a real wakeup call. I was like, I really got to focus and I really got to put in the work. I practiced every single day. It was a lot of collaboration about what I could do and couldn’t do and what I could push myself to do. For the “BAMM” music video, we had this air track to practice doing flips on, and then one day I was just doing flips on it and choreographer Christopher Scott saw me and said, “Lets get a huge one of these.” And the next day I come in and there’s a 30 foot by 10 foot one that we were all able to jump on at the same time. We re-choreographed the whole “BAMM” music number so it would fit on the air track. That’s why I can do all those crazy back drops.

This is your first DCOM, what does it mean to you to be a part of the Disney family?
Milo Manheim: I mean, everyone at Disney is so warm and welcoming. I’ve met so many different kids from different shows and moviesm and we’re all immediately family. Disney is a family. I’ve met some kids one time, and I’ve talked with them every day since I’ve met them because we’re all a part of this Disney family. Everyone is so supportive. I just remember being like, “I’m on Disney Channel. I’ve never done anything before in my life. If I can do this this fast, I can do it.” So it really just made me realize that like if I want to do this with my life, I totally can. I just have to work hard and really commit to it.

What’s favorite DCOM of the past?
Milo Manheim: Oh, well, High School Musical, without a doubt. But Descendants 2 really blew my mind.

Would you want to see a Zombies sequel?
Milo Manheim: I would love to see a sequel! Number 2, number 3, number 4!

HollywoodLifers, are you going to watch Disney’s Zombies? Let us know!