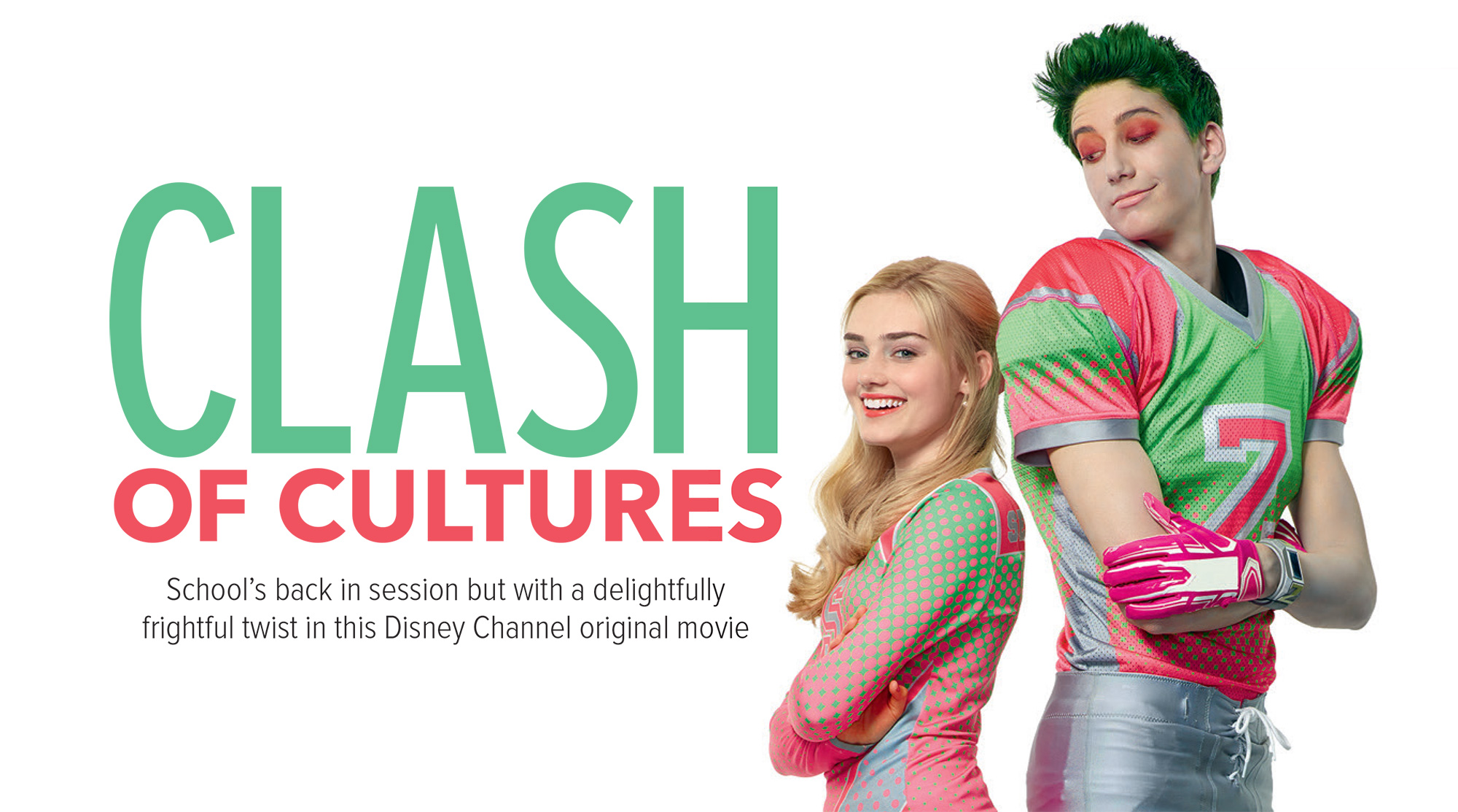 Navigating the rules and social cliques of high school can be challenging at the best of times, but imagine being a zombie and experiencing your first day of ‘human’ school. Such is the premise of Disney Channel’s fun new original movie, “ZOMBIES.”
Following hot on the heels of the global success of “Descendants” and its 2017 sequel, “ZOMBIES” is an equally entertaining all-singing, all-dancing extravaganza that has an important message about acceptance and embracing everyone regardless of their differences.
Foxtel magazine caught up with 17-year-old stars Meg Donnelly and Milo Manheim  – who play perky, preppy aspiring cheerleader Addison and wannabe football player and zombie Zed, respectively – to get the inside scoop on what to expect from Disney’s latest stellar offering…

Fifty years after the zombie invasion, the quaint, cookie-cutter town of Seabrook is flourishing. Though zombies no longer pose a threat, they’re still forced to live in exile in the run-down part of the city. But when it’s decreed that the children of Zombietown can now enroll in Seabrook High School for the first time, what ensues is an epic culture clash.
“This film is very visually captivating,” previews Manheim. “There are so many contrasts between the zombies’ dark colours against the pastels of the humans, it’s super cool to see the differences of the two cultures next to each other.”
Donnelly adds that the film’s themes are universally appealing.
“The whole thing of going to high school for the first time and trying to fit in – it’s very relatable in that way and I think kids will learn a lot about being true to yourself.” 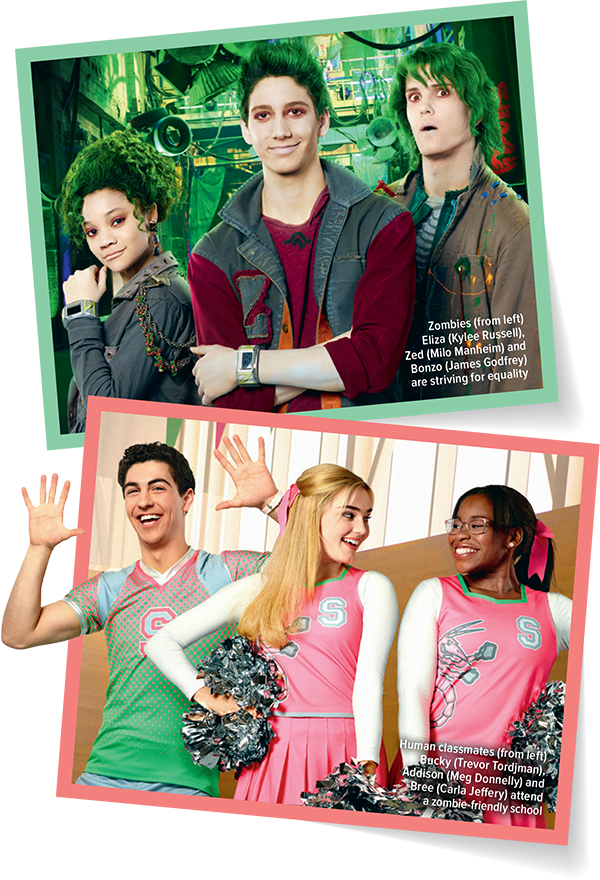 Top of the pops

The stars each have their own favourite song-and-dance number that stood out during filming. For Donnelly, it was Addison and Zed’s duet “Someday.” “It’s when the two of them are realising how alike they are and how they wanna be friends in the real world,” she reminisces. “It’s really cute and it was so much fun to film. All the music and the dance sequences are just so amazing.”
Energetic number “BAMM” tops Manheim’s list. “BAMM” is definitely one of the most entertaining songs because we had this air track that was installed into the ground so we could do these crazy flips and bounces,” he enthuses. “It is a really cool routine!”

Stepping into Addison’s sneakers appealed to Donnelly for a number of reasons – first and foremost because she sees past the zombies’ differences to be the film’s moral compass.
“I love her because she’s so brave and optimistic, and she is the first person to say, ‘Hey, zombies and humans are kind of the same.’ It’s cool she has that realisation.”
Despite many hours spent on the sets of various television shows throughout his childhood, ZOMBIES marks the first role for Manheim – the son of Golden Globe and Emmy winning actress Camryn Manheim. But having a famous mum didn’t make winning his role any easier.
After first auditioning for the dashing leading man, producers brought him back in to try out for villain Bucky. It was only then that Manheim believes they could finally see that he made the perfect Zed.
“Zed was the only person I could play. I think he is similar to me, so it was really easy to portray him,” Manheim smiles.

“The film is very visually captivating. There are so many contrasts” – Milo Manheim

Both actors were massive fans of the 2006 Disney phenomenon High School Musical – in fact, Manheim even had an HSM-themed birthday party when he was seven! So, to say that they’re thrilled to now be a part of the Disney family is an understatement. “High School Musical was a huge part of my life,” Donnelly says. “I remember watching them and being like, ‘My dream is to be in a Disney Channel original movie.’ So the fact that this is happening is surreal. I’m excited.”

Meanwhile, the inevitable comparisons already being made to HSM star Zac Efron are almost too much for Manheim to bear. “Oh wow! I’m smiling from ear to ear right now that you’ve said that!” he beams. “That would be amazing if I was the next Zac Efron. I grew up watching him, being in awe of him. He has a great career. I think we’re kind of similar. He definitely has way better abs than me, but I’ll get there one day!”